Liverpool continue their barren run in 2017 with another loss in the Premier League, this time at Hull City, goals from N’Diaye and Niasse damaging Reds’ slim title hopes and probably a firm grip in the top 4 too.

It was another loss where the pattern was pretty much same for Jurgen Klopp’s men, having possession and creating minimum chances with it. Lack of potency in the final third, always looking for the final pass when you can try few shots from distance or change the point of attack by switching play, a damaging defence along with a morale-antagonist goalkeeper makes up for a team that is lacking everything literally.

For the first time since November, Reds started with all of their potent attacking options in Lallana, Coutinho, Firmino and Mane, but the impact was close to none. Once again lack of a finisher in and around the box was lacking. Firmino is a good player when closing down and creating space for others are needed, the Brazilian is most effective when teams are prepared to give space while playing their way out. In contrast, when playing against teams who defend deep, these things are not needed primarily. 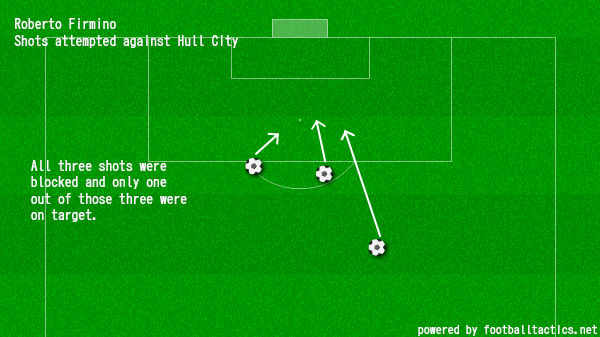 The Brazilian had no attempts on target against Hull and all three shots that were atleast goal bound were blocked, a central forward player with these stats will never win a team anything, off the ball works works well when a player is as good on the ball. To add to all these, he isn’t good enough aerially too.

The problem for Klopp is that he has very limited options at his disposal, both Origi and Sturridge haven’t shown enough promise when given the opportunities but on the context of the patterns that are recurring, choosing Sturridge might not have been a bad option.

Onto midfield, another selection and tactical error was made when the manager selected two holding midfielders in Can and Henderson for a game where one was more than sufficient. The German had Wijnaldum as a play-maker on the bench but persisted with a midfield combination that lacked creativity and guile.

If we look at the positioning of each Liverpool player when they are attacking and building up play against a deep defending side, we can find some basic errors that are being repeatedly done and needs addressing. 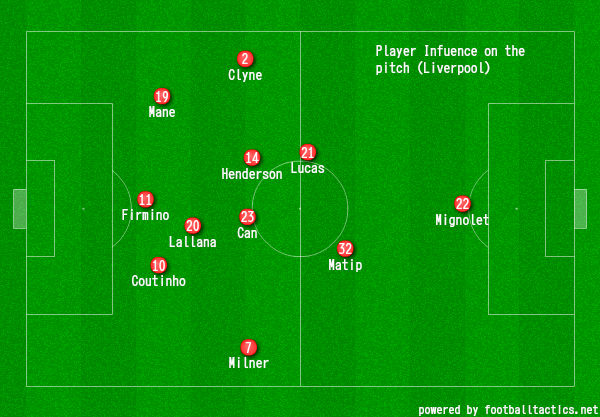 The above image shows the positional influence of each player throughout the game, we can see the front three are very narrow with width provided solely by the fullbacks, the two holding midfielders working behind Lallana.

Now, some of the mistakes that are being repeated time and time again are:-

We all know Liverpool’s front three are very narrow attacking the width of the penalty box. This becomes quite easy to defend against, all the three can be very easily marked by the combination of centre-backs and defensive midfielders as there is no one who is bothering the centre-backs by playing at the shoulder of the last line. The fullbacks are the only source of crosses and the quality of crossing hasn’t been good at all. 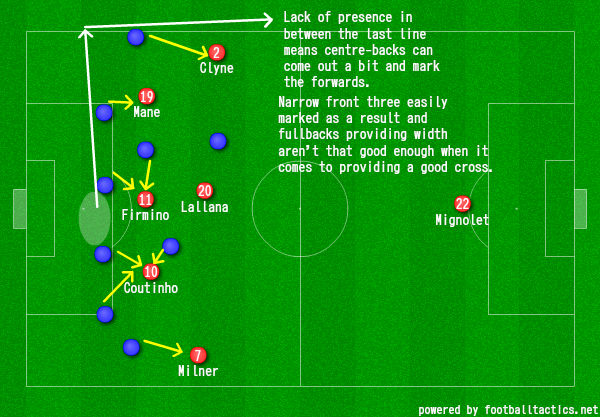 Firstly, Milner playing at left-back is a considerable disadvantage, he is right-footed and takes a touch before crossing or doing something meaningful, this results in the tracking player coming to back to position and marking his movements. On the other hand, Clyne has been better but his first touch sometimes lets him down.

Defensively, there are some basic errors which are taking place again and again, individuals are  repeating the same mistakes. Once again, Mignolet and corner-marking came under scanner for the first Hull goal, we’ll see the part by part explanation of that goal and how a basic defensive mistake in set-pieces cost Liverpool week in week out.

This is the situation when the ball is coming to the box from a corner, Henderson (encircled) is alone along with Can as the first line of marking, there are three Hull players attacking the area marked by the Liverpool skipper. The other five Liverpool players are zonal marking in front of the keeper, the problem is the gap between the first line and the zonal line, corner is fed closer to the first line and the first header is won by a Hull player. As a defending you are in trouble when the first header is won by the opposition player, it’s just poor positioning this and needs to be corrected otherwise teams may aim for the penalty spot where they put their corners and get Liverpool out-numbered.

As we see in the image, the encircled player won the first header and the ball loops towards the rectangular area, where three Hull players are attacking on side and not even one defending Liverpool player is there to stop that run, ultimately the keeper had to come out and deal with the situation. But, he made a real meal of it with a weak punch which the found the feet of N’Diaye who can’t miss from 3 yards open net.

It all started with poor corner-marking positions and not reacting quickly to win the second balls. The second Hull goal was just because of a poor positioning by Lucas who got caught ball watching and also got underneath the flight of the ball. This allowed Niasse to run beyond and across Matip, once the ball goes past Lucas, it was one on one finish for the striker.

There are problems aplenty and as of now solutions seem a distant thing for Jurgen Klopp and his men, they are fifth now and their top 4 chances are hanging peculiarly, improvements have to come thick and fast otherwise Liverpool fans may not see Champions League football next season too in their stadium.